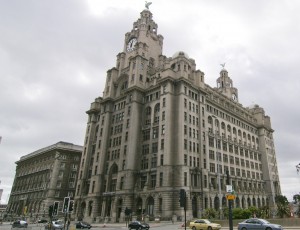 Have you invested in the city of Liverpool? Get in touch if you have had problems with student pods

It seems that our warnings that the Liverpool student room investment sector being problematic has, unfortunately for investors, come into fruition.

Not a week goes by without further complaints and concerns across different developments and in the news this week are the several developments in the city of Liverpool, previously by Middle England Developments which were offered through many high profile UK sales agents and brokers.

If you have been affected by any of the developments by the mentioned developer or sold a unit through one of the sales agents in the UK or abroad, then please get in touch with us as we have been contacted by a national newspaper that is looking to do an expose on other similar developments in across the country. We’ve been advised that those that have had direct experience can supply information anonymously if they desire.

What about such failed investment schemes? Why do investors keep falling for the same tricks? The common thread with companies as mentioned in the article and others that have gone before them is the lack of humility and compassion. It almost seems that you need to have psychopathic tendencies with no remorse on your actions, very much like the lead character on the Wolf of Wall Street. As an aside, we received an email shortly after the release of the movie by a leading self styled UK public speaking guru. The email included a sales pitch offering the chance to attend a seminar with the original Wolf whereby the now well renowned speaker would give a full day seminar on his backstory and, further down the line, how to use sales techniques to  make money out of others. Incredible! Individuals paying a rip-off merchant on how to make money out of others! The first thing we did is unsubscribe from the mailing list.

The other common tendency here is the shark to reappear in various guises a few years down the line using his brother as a director. If there’s no brother, replace that with his wife, mother, father, sister, cousin, pet dog and so on. In this particular case in Liverpool, the new company formed by the director of the failed initial company has “has been able to regain the leases on some of his properties through his new firm” through the insolvency practitioners. This will be a source of frustration to the clients that had put their funds into the original company. This is common practice with these types of operators and across other seized developments in Salford, Manchester and Bradford, the same – some would describe unethical – has happened.

While we can express sympathy with the investors in this development, in this particular case the principal director had a long and open history which doesn’t reflect too kindly on his character. Yet individuals still decided to go ahead with it. It’s certainly something commendable to give individuals a second chance, but why would people put money with someone that has had previous in the same industry? 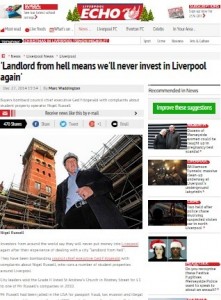 Investing in the Liverpool student sector is a cause for concern

We have previously mentioned that the main two individuals behind a failed Manchester based developer of student pods is back in the market lurking in the background of another company selling student pods. Whilst we cannot name this openly due to legal reasons, we have spoken to clients who are also aware of this. This is all well and good, but the concern is for new clients that the sharks target and they will be the ones funding the lavish lifestyle of such unscrupulous merchants.

We have spoken to clients who, very much like the investors mentioned in the Liverpool Echo article, now refuse to do business in the city of Manchester or Salford due to the poor reputation that the city has unfairly received due to to the actions of a very few number of companies. This is a real shame and we have found it difficult to explain to clients who are located thousands of miles away that not everyone is out to fleece them.

Is there a common pattern with almost the student schemes being flouted?

There seems to be a common pattern now which relates to student pod investments:

It never seems to be the fault of oneself and it excuses have been heard before. obviously, such waffle is used as a tool of deflection and in this case it’s said that one of the reasons the development failed is because of “everyone and his mother jumping on the bandwagon”. We can’t say if this is a reason why this particular development failed, but the notion that developers are the ones making huge swathes of return from dicing up units to the smallest component and then retailing them at two or three times the price per square footage against comparable locations is a lucrative one. We have explored this idea when looking at how student pods are overpriced in some towns and cities.

This will be our last newsletter in 2014. We hope you had a great Christmas and we’ll see you in the new year.